Let’s be honest: Valentine’s Day is kind of a mixed bag of emotion. In the advertising world, though, Valentine’s Day seems to bring out a ton of creativity. Every year, there are some great out-of-home campaigns that help people and brands proclaim their love for all to see.
We’re big fans of a good Valentine, and we thought we’d put together a list of some of the best examples of what the OOH world has brought us at this time of year. Check out our picks.

Yes, 2012 feels like it was several lifetimes ago, and DOOH has progressed a lot since then. Still, there were some neat campaigns running back then, including a sweet Valentine’s Day promotion by Dove.
For about a week, the brand displayed questions about love on a large JCDecaux screen in London’s Victoria station, inviting viewers to share their take on the subject by via Tweet or SMS. Select responses were then displayed.
Social media integration is a great way to augment a DOOH campaign, but Dove didn’t stop there. Each day, they also had a team at the station to hand out flowers and other gifts to people in the station. A nice, human touch that helped augment an already sharp DOOH campaign. 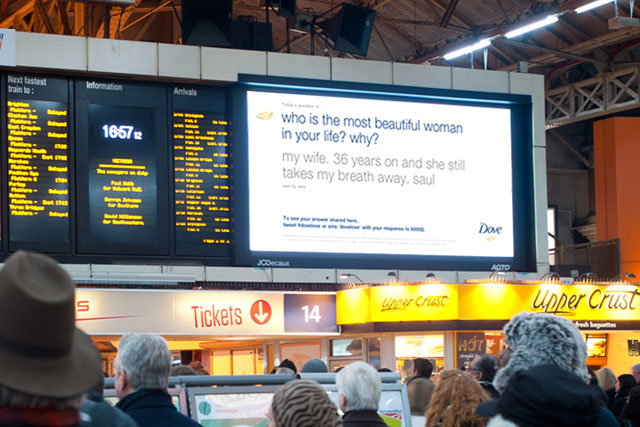 This one might be cheating, but we think there’s an important lesson to be learned here. Spotify’s annual year-end “Wrapped” campaign is always entertaining for the way it exposes the weird and fun listening habits of its users for the world to see (anonymized, of course). In 2016, one funny billboard asked about a mildly concerning listening habit that one user had on Valentine’s Day of that year.
Was this a “Valentine’s Day” ad in the traditional sense? No. What it was, though, was an ad that tapped into our collective sense of humour and shared empathy for someone who was probably not having a great day and so turned to music. Who among us, after all, hasn’t played a sad (or “Bieber sad”) song when feeling down?

Valentine’s Day isn’t always the easiest from a gift-giving standpoint, and even though a significant other might say they don’t care much about the day, odds are decent that they’ll be happiest if you give them a thoughtful something to mark the occasion.
Our sincere thanks to the folks at Clear Channel, then, who had the sharp idea of sharing a Valentine’s Day gift guide on their digital screens to help last-minute shoppers pick out the right gift for their special someone. Suggestions included items from Gordons Pink and COTY Mark Jacobs and were probably just the things to save Valentine’s Day. A small example of how digital out-of-home can deliver valuable important to people when they need it most.

If you’re the kind of person who likes being cuddled up with the person you love, Valentine’s Day is as good a day as there is for doing that. Fitting, then, that Eve Sleep put together a campaign that allowed users to create customized pillows with their and their significant other’s initials paired together. The pillows weren’t real, of course; they appeared on a digital billboard, as well as in a live stream delivered to the company’s website, but they were cute and they advertised the company’s limited edition alphabet pillows.
The theme here, as well as in multiple other entries on this list and in the DOOH space generally, is that audience interaction is a great way to set your campaign apart. Smart move, too, for the company to put the audience-created messages both on their billboard and online. The bold statement of out-of-home and the convenience of online all in one. 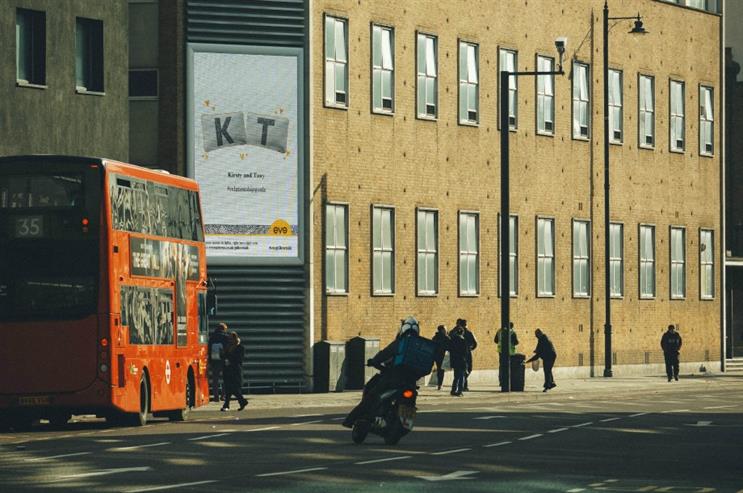 In a list full of great Valentine’s Day ads, this one might just be our favourite. Combining digital out-of-home with an incredibly inventive out-of-home billboard, this campaign tied into Snickers’ long-running “You’re not you when you’re hungry” campaign for a little bit of Valentine’s Day delight.
With this campaign, a large billboard in a high-traffic pedestrian area offered out free Valentine’s Day cards to those who had forgotten them. Digital screens nearby, meanwhile, directed the audience toward the board with directions and an invitation to get a little help that Valentine’s Day. Viewers were free to walk up and pick a card off of the board. All of the cards were arranged in letters that said “You’re Forgetful When You’re Hungry.”
Interactivity is always great, but it’s so much more powerful when it comes with something tangible. We just love everything about this campaign.

Sure, you’ve probably wanted to intervene in a friend’s or family member’s failing love life, but have you ever bought them a billboard to do so? Matt’s coworkers did with a little sponsorship help from Lark Lawn & Garden, putting the rest of us to shame and creating one of the funnier Valentine’s Day billboards we’ve seen.
The design is probably most generously described as a noble effort, but Matt does at least look like a decent, presentable guy. What’s more, the ad apparently drew a fair number of texts and emails from interested parties, proving that when you really want to get a message out there, out-of-home is the way to go. Here’s hoping Matt found love.

Here at Broadsign, we’re always down to find creative inspiration from the out-of-home space, and this campaign by OKCupid is a fun example of how a simple idea, executed well, is sometimes all you need.
Playing off the online dating world’s ubiquitous abbreviation “DTF” (we’re not going to define it here, so ask Google), the brand bought up billboard space that redefined the term with meanings that are a little more wholesome. It was a nice way to latch onto a term with popular appeal, yet spin it into something that is both safer and more representative of the brand’s identity. We also love the artwork. Kudos to the creative team.

Teleflora knows it’s no fun to have a secret crush you’re too scared to confess your feelings to, and they decided that a grand gesture was needed to fix that problem. That’s why they invited real people to #LoveOutLoud and announce their real feelings up on a billboard in Times Square for all to see.
Big ups to anyone who was brave enough to actually do it, and to Teleflora for coming up with such a fun concept. It was a great way for the brand to get its name out there, and for something we’d argue is a public service. You have to imagine some confessions sparked a romance, and for those that ended more awkwardly, getting rejected after making a billboard confession can’t feel worse than being left on “Read.”

Shout out to the folks at Adomni for bringing the magic of Valentine’s Day billboards to the masses. This year, they’re offering everybody the chance to buy 10 ad plays on a digital billboard for just $10. Would-be buyers can head to their website for the creation wizard, which offers a selection of locations, start times, and customizable templates to choose from.
What we love about this campaign is that it accomplishes so much with a simple idea. It builds goodwill and media attention for Adomni, it showcases how easy the company makes it to buy billboard space, and it also offers regular people the chance to share express their love for a cost that is squarely in “impulse buy” territory. Great stuff. 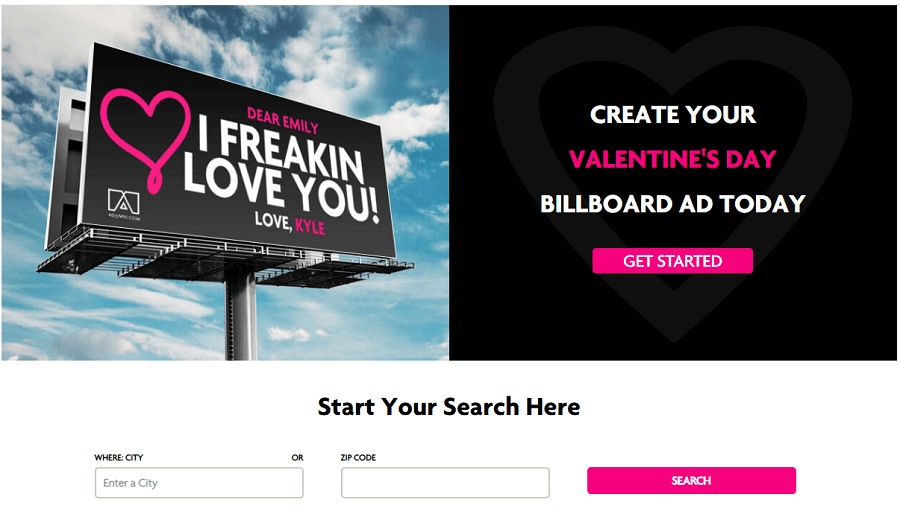 This is definitely the funniest Valentine’s Day billboards, and it’s probably one of the funniest billboards period. To take a film like Deadpool, a bloody, irreverent, R-rated comedy, and advertise it like it’s some soppy love story is a clever bit of advertising comedy. Bonus points for the publicized antics of Ryan Reynolds running with the gag and trying to convince his wife, Blake Lively, to see the film with him as a romantic date on Valentine’s Day. Lucky thing for the marketing team that the film was scheduled for release around Valentine’s Day, and lucky thing for us that they came up with this idea. 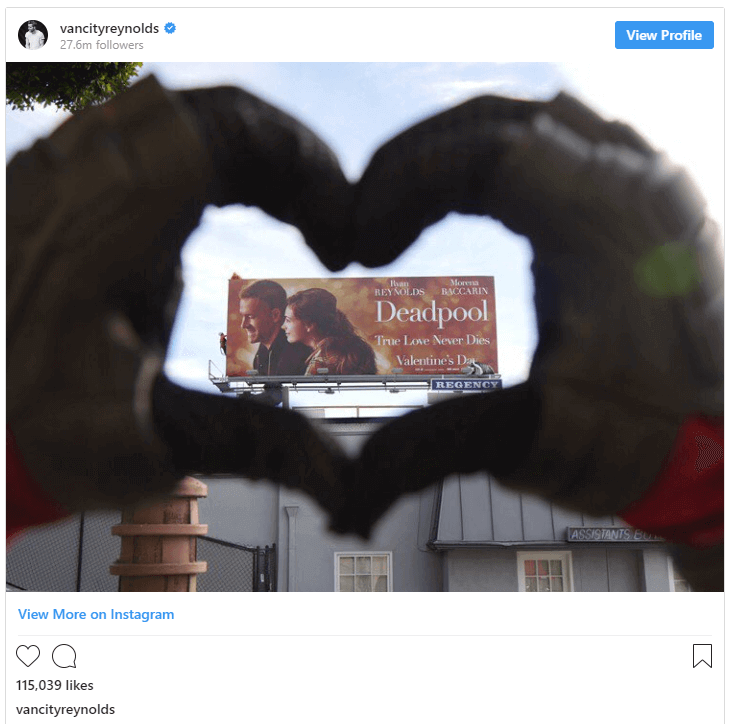 In a phenomenon that mystifies and enrages good pet owners, former pets are abandoned all the time by people and families who no longer want them. Given how much love those cuddly critters have to give, there’s a special place in our hearts for the Valentine’s Day campaign run by Goa Billboards to find the animals a forever home.
Run on digital billboards around Brisbane, the ads shared a call to the audience to adopt a homeless animal from their local shelter. We like the selflessness of the act – there was no particular affiliation, so all shelters in the area might have benefited from the ad – and we would love to see a similar concept tried again in future with even more data integrated. How cool would this type of message be if billboards in different parts of town advertised for the shelters nearest them? 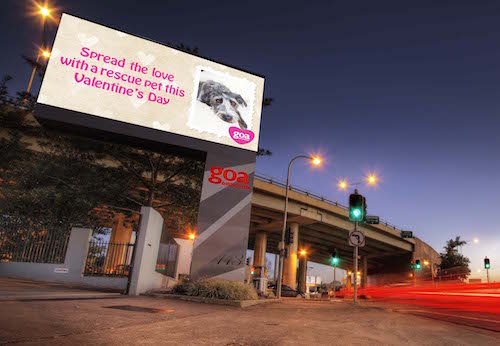 A Valentine from Afghanistan (2014)

Whatever one’s feelings on military action generally, it’s well understood that deployment can be a difficult, lonely thing both for the service member and their loved ones back home.
That’s why, even though Adventure Signs had previously offered digital billboard space for Valentine’s Day messages, our favourite iteration was its 2014 campaign where a husband on deployment and his wife each independently reached out to place love messages to the other on a billboard. Valentine’s Day could do with more sweet stories like these. 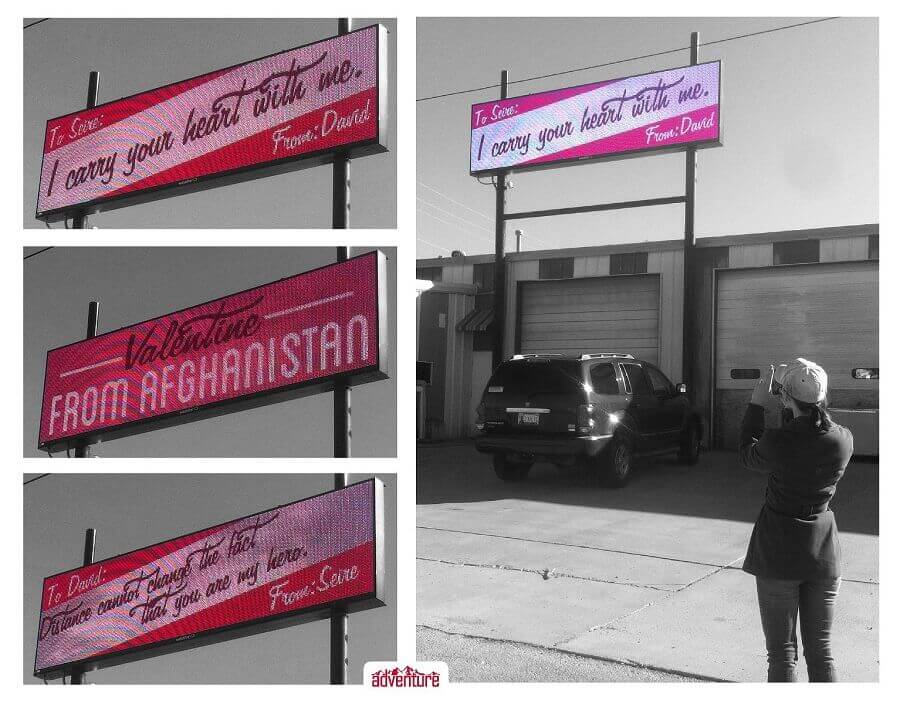 Digital displays are what we love most, and we can appreciate a good billboard, too. Still, the outdoor advertising game is so much bigger than just those categories, and we thought we’d shine a light on one particularly inventive Valentine’s Day campaign that we loved.
The cute idea comes courtesy of The Flower Council of Holland, which installed 1,500 little emergency rose boxes around Paris. Within each box was a rose, and on the outside, a message saying “In case of love at first sight, break glass.”
Big points for originality, and bonus points for the “glass” actually being plastic wrap. Safety first. 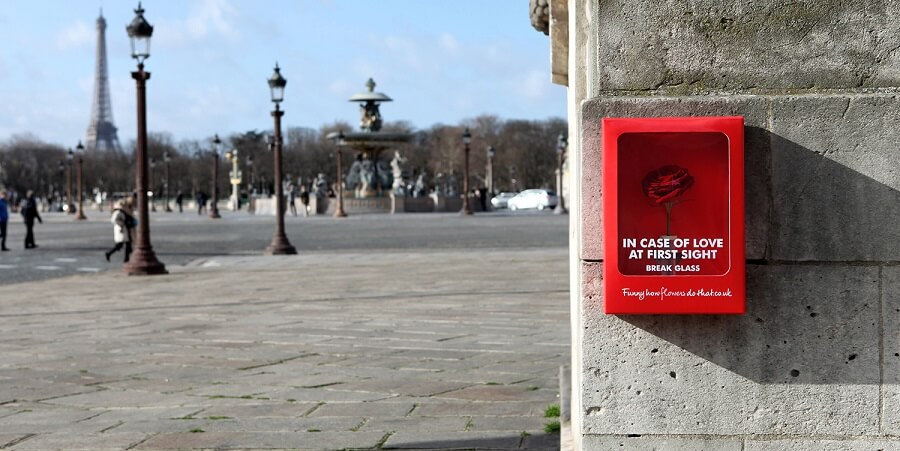 It seems Twitter is a popular vehicle for smart, user-generated Valentine’s Day campaigns in the DOOH space. In addition to the others we’ve covered, we really like the campaign by Massage Envy spa, which let the audience tweet out Valentine’s Day messages to loved ones for display on a roadside billboard. The campaign led to some fun back-and-forth messages between audience members, and each individual got pictures of their tweet sent to them digitally as a keepsake.
We like the more straightforwardly “Tweetish” design of this campaign, and we like that the brand thought ahead and took pictures so that participants could enjoy their message for years to come. It doesn’t match seeing the real thing in the moment, but a snapshot of one’s own billboard message is still nice to have. 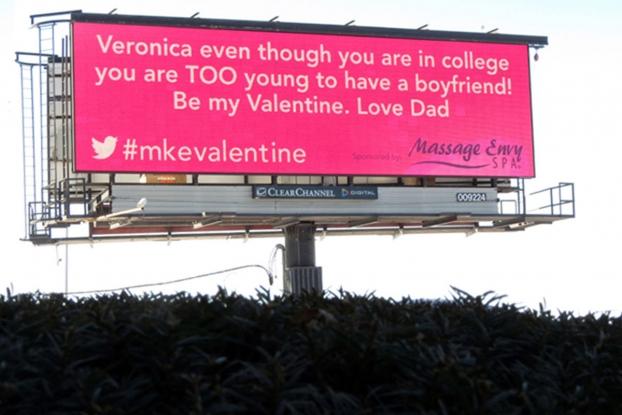 Want to ensure your out-of-home advertising is as good as can be?
Avoid common creative pitfalls with the help of our eBook!