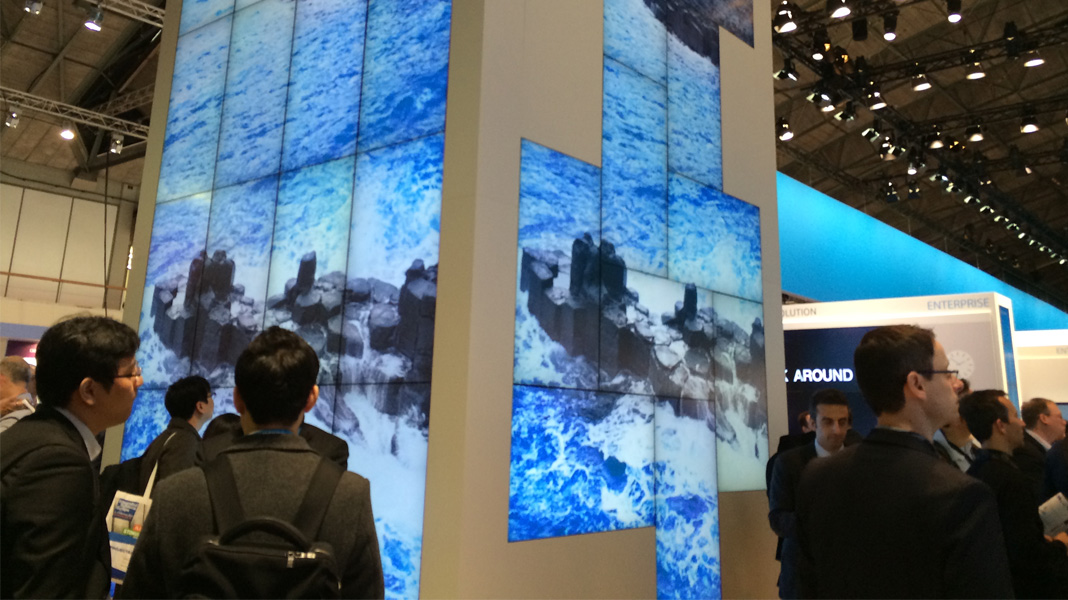 The first Integrated Systems Europe was held in Geneva, Switzerland in February 2004, bringing together 120 exhibitors and just under 3,500 attendees. A year after the event celebrated its 10th anniversary, ISE 2014 brought a show floor and exhibitor count larger than ever before. Again occupying all 12 halls of Amsterdam’s RAI, ISE featured over 900 exhibitors and was set to attract more than 45,000 attendees from 130 countries.
Traditionally a professional AV and electronics show, some might say that ISE has fallen victim to sprawl, with areas dedicated to digital signage, residential solutions, smart buildings and unified communications. Yet this is not the case. All facets are complimentary and the variety of participants brings about meetings that may not have occurred otherwise. Add to this the free educational sessions at show floor theaters and guided tours of the digital signage hall, and you have an event that understands the importance of digital signage to the AV sector.

Many first time exhibitors were present in Hall 8 (that of digital signage), a testament to the industry’s faith in the importance of ISE. One of the newbies, Toshiba Europe GmbH, chose ISE to announce its entrance into the business display and AV market. Veterans were quick to compliment the show too, adamant that although ISE has grown in size, it has remained consistent in quality and the potential customer base. So what were the hot topics at ISE 2014?
4K
The debate continues as to whether the days of glasses-less 3D screens are numbered, but both sides can’t deny that 4K screens have deprioritized the former’s development. 4K (or Ultra HD) resolution is four times better than that of its predecessor, Full HD.
Read more about 4K here.
(Smart) Video Walls

Video walls are by no means a new concept, but becoming increasingly stunning installations. The most mesmerizing video wall at ISE likely belonged to Samsung.
Interactivity
The average trade show attendee is beginning to understand digital signage, meaning that dialogue between vendors and visitors has shifted from the basics toward discussions about the feasibility and profitability of specific capabilities. Interaction through facial recognition and gesture is popular, all with the goal of creating personalized campaigns for end users.
Multi-touch and Touchscreen Tabletops
Speaking of interactivity, it has become not a habit but second-nature to touch almost any screen within reach whilst expecting a reaction. Today’s touchscreen displays are waterproof, resistant to ambient light and can recognize a high number of touch points. 3M showed how multi-touch screens can be used in real estate, while U-Touch and Baanto hired an artist to demonstrate just how detailed touch technology can be, calling it high-end multi-touch. Large-format touchscreens with multi-touch capabilities were also highly marketed for classroom and educational purposes.
Holograms and Transparent Screens
Taking old-fashioned magician’s tricks and physical merchandising to new heights, the emergence of holograms and transparent screens are a sign that digital signage is beginning to diversify into different media segments. Glorified in a glass confine, tangible products are enhanced with real motion, 3D-like floating content, sometimes with a 360 degree viewing range. This type of technology is great for verticals like retail, education and museums. A particularly captivating example is Realfiction’s DREAMOC Scandinavia 180 XXL which launched at ISE.

Honourable Mentions
Runners up consist of the inclusion of audio with digital signage campaigns, a niche that is gaining momentum due to products such as Barix’s solution of scanning a QR code to listen to a screen’s audio on a smartphone in real time.
The concept of smart homes, buildings and cities is also a topic that will become increasingly commonplace in the future. When Google enters an agreement to buy a home automation company (Nest Labs) for $3.2 billion, it’s a safe bet that there is a place for digital signage amongst smart thermostats, smoke detectors and door openers.
Finally, a key element linking all trends at the show was automated audience measurement. Much of the technology on display in the digital signage hall was meant to fulfill the age-old advertising challenge of determining and reacting to ROI. It’s highly likely that audience measurement platforms will become a priority for vendors and customers alike moving forward.