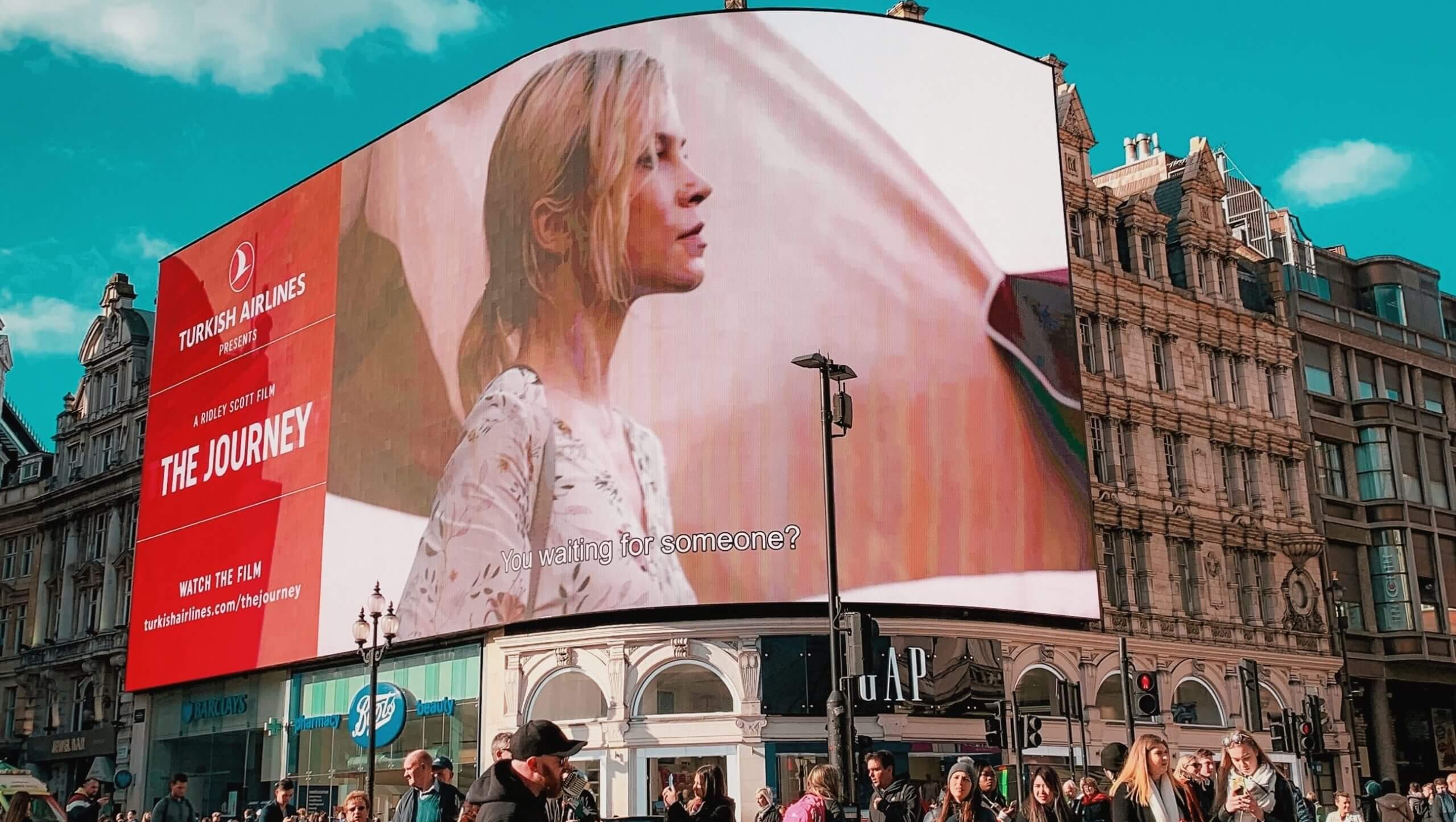 What about digital out-of-home advertising?

As you might guess, digital out-of-home (DOOH) is a digital subset of out-of-home advertising. It’s commonly seen in transit spaces like airports and train stations, retail and restaurant locations and outdoors, like in Times Square.

While both static and digital OOH have some similarities, like bold creatives, high visibility and are generally well perceived by the audience, there are a few ways DOOH stands out from its more traditional counterpart.

For one, DOOH allows for dynamic content including video and HTML5 files, and some screens even support interactivity with the audience and audio capabilities. This makes for a much more contextual and attention grabbing campaign.

DOOH campaigns can also be bought programmatically similar to the way social media and digital media is bought, This means buyers set up campaign parameters like audience, budget, and location, and automated systems will buy the DOOH inventory only when the requirements are met. This enables a more flexible approach to OOH buying, as it requires no upfront commitment and can be adjusted on the go.

You may have initial doubts about the effectiveness, especially for goals other than brand awareness. Actually, digital out-of-home can perform well for a large range of metrics and KPIs, however, it is a little tricky to track results.

Benchmarking studies have been conducted that prove the power of OOH. Here are some key findings:

How can I target the right audience with an OOH campaign?

An out-of-home campaign is similar to any advertising campaign when it comes to identifying an audience. Once you’ve determined the basic demographic characteristics for your campaign, like age, occupation and interests, you need to ask one last question: where does my audience spend time? Are they business people who work downtown, where taxis drive by and billboards are more present? Are they suburban youth who rely heavily on public transportation?

Don’t forget to also think of the social life your audience lives. Do they hang out in trendy bars and restaurants? Are they more likely to be found in shopping malls or at a festival? These questions are important because location plays a large role in the impact an out-of-home campaign will have.

When using a demand-side platform (DSP) like Broadsign Ads (formerly Campsite) to book a DOOH campaign, you don’t need to think as heavily about screen location. Mobile location data is built right into the platform’s buying algorithm, so once audience targeting is set up by the buyer, the platform automatically selects the best screens for the job.

Broadsign Ads uses over 150 demographic data points to define audiences and allows you to target them in contextual environments, like offices, resto-bars and residential areas, across screens in major Canadian and American cities.

How much does an OOH campaign cost?

Traditionally, out-of-home advertising campaigns were priced on a per-play basis – that is, how many times your OOH ad plays in a given hour or day.

Yet in more recent times, publishers have adjusted their pricing to match digital ads, with many now offering cost-per-mille (CPM), or cost per thousand impressions. For an OOH campaign, the CPM calculated based on the average foot traffic recorded in the sign’s location at a given time.

The advantage of a DOOH campaign, however, is its potential to be more targeted. While a static poster is generally up for 24/7 for weeks at a time, a digital campaign can be turned on or off based on  audience segments, more precise geolocation, the time of day and specific audience requirements. These factors all contribute to maximizing the ROI of your campaign.

As with any marketing channel, the cost of an OOH campaign varies across locations, publishers and timing. According to the Out-of-home Advertising Association of America (OAAA), many studies have shown that out-of-home advertising costs are significantly lower than other media. For example, a CPM for online campaigns can reach about $17, $21 for magazines and $25 for a TV spot. In comparison, a billboard campaign will cost between $3.38 and $8.65 per thousand impressions.

Learn more: For a more detailed explanation of what determines the price of outdoor advertising, read this blog post to see what a billboard costs.

How do I launch my own out-of-home advertising campaign?

To get a static out-of-home advertising campaign love, there are a few logistical steps to go through. From requesting RFPs and negotiating rates with multiple publishers, to printing the billboard and having it installed, the lead time between your ideation to creation is quite long.

That’s where digital out-of-home gains an edge over traditional OOH. While some steps can’t be skipped, digital distribution across your campaign screens saves some time.

For an even quicker execution, programmatic DOOH is the fastest of them all. Using a DSP like Broadsign Ads, you have access to multiple publishers’ screens all in one platform, rates are based on current CPMs, and all campaign details are available at the click of a button.

Check out this video to see how Broadsign reached 400,000 climate activists with only a few minutes to spare.

Just like the golden rule of real estate, the right location has a huge impact on the success of an out-of-home advertising campaign – another word for OOH is location-based advertising, after all.

Location not only helps you reach the right audience but it also adds context to your OOH campaign.

Say you want to reach young adults for a new sportswear line campaign. You’ll find a large concentration of this audience during peak times in suburban transit systems and it is a great option for a campaign. However, you could also display the same OOH ads in local gyms, where gym-goers can look down at their worn-out clothes and be inspired!

It goes without saying, a poorly designed OOH ad will fall flat, as with any other channel. Don’t forget, you’re competing with the other OOH ads, people, cars and lots of other stimuli in the area, so making sure yours stands out is very important.

It’s important to not only catch their initial attention, but the design must also deliver your message quickly and efficiently.

Here’s a classic example of creative OOH design from McDonalds, created by marketing agency, Cossette. The campaign is a perfect example of great design and great use of location.

While we said delivering a message quickly was important, sometimes it’s good to break the rules. Dating-app, Hinge, did just that and launched a series of lengthy billboards across New York City’s trendy neighbourhoods, like SoHo and Williamsburg. The brand used real questions from the app in a user-generated OOH approach.

According to an eMarketer report, DOOH ad spending will grow in 2020 and traditional OOH will shrink. In the US, DOOH is expected to account for about one-third of all OOH spending.

To leverage DOOH to its fullest, getting familiar with a programmatic buying platform is a must to build a campaign that is the ideal fit for your marketing goals. Making sure your team knows what audience capabilities the platform has, a broad idea of where their screens are located and from what publishers, and an overall understanding of the campaign workflow will enable you to launch a great campaign in a few clicks.

What’s great about a buying platform like this is smaller companies can also get into DOOH. People’s Pint, a local brewery located in Toronto, used Broadsign Ads to launch a hyper-targeted campaign to reach beer lovers in their community. With a 200$ budget, People’s Pint increased its foot traffic by 12.8% during the campaign period.

Of course, this article is just a brief overview of the world of OOH, but we think there’s no better way to learn than to jump right in. To get started, book a demo with one of our experts.