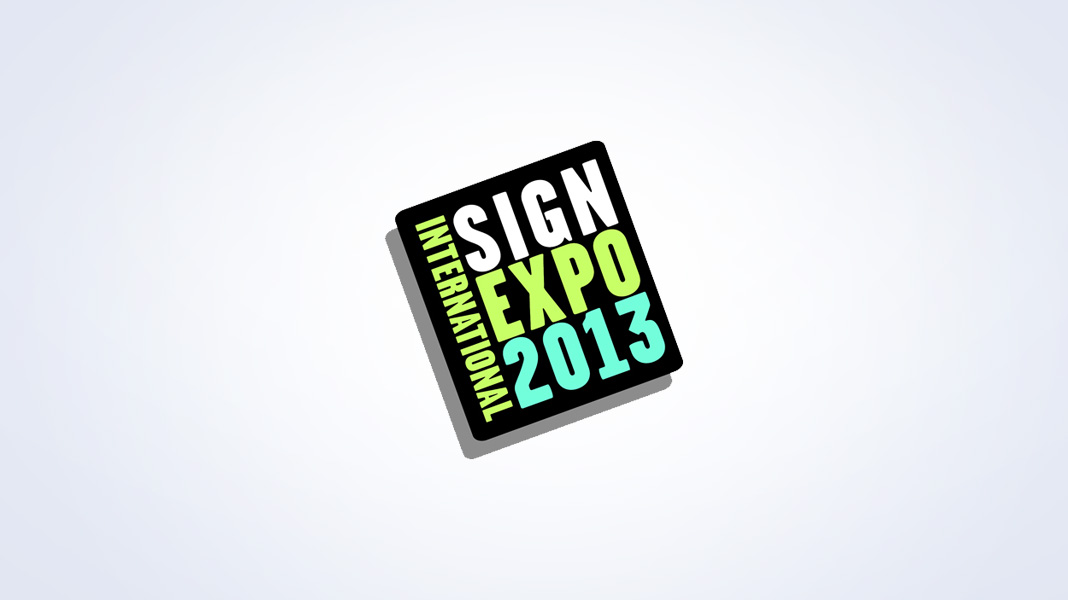 Getting a feel for the movement between static and digital signage.

Transitions tend to be both uplifting and unsettling periods of time. In Montréal, April is a month that bridges cold and warm weather by bringing rain, snow and sun, sometimes all in the same day. It can be difficult to determine what footwear to put on in the morning and it was thus a relief to escape fickle shifts in weather by traveling to sunny Las Vegas for the 2013 International Sign Association’s Sign Expo. At the Mandalay Bay Convention Center, however, I encountered yet another point of transition. Traditional printers are looking to venture into the digital signage realm and similar to dressing for spring in Montréal, they are wondering if they will have to wear more than one hat.
The 2013 Sign Expo was impressive in scale with a reported attendance of around 20,000 registrants. Another interesting size range had to do with the products and services themselves: companies had offerings ranging from signs as small as those appearing on public restroom doors to objects as big as trucks used for sign installation and maintenance. There were even live demonstrations of print being applied to the exteriors of cars.
As opposed to previous years when the presence of digital signage was said to be scarce and dispersed, 2013 brought a specific area for DOOH booths called the Dynamic Digital Park. This allowed for vendors to convene and appear as a congruent sector (which in fairness, the industry is working toward). It was Broadsign’s first time exhibiting at the 2013 Sign Expo and the company was neighboured by 18 other affiliates of the digital signage community such as fellow Digital Signage Federation members Ingram Micro, Caldera, Stratacache, Samsung, Almo and the DSF itself. Sitting at the booth, I overheard a passerby telling his companion that digital signage is the next big thing. When his companion inquired as to what digital signage is, the passerby replied, “you know, menu boards and stuff”.
It is the “and stuff” that has a lot of room to grow at shows such as the 2013 Sign Expo where despite the inclusion of a Dynamic Digital Park, the area was still tucked into a corner and an afterthought for most attendees. Nevertheless, traditional printers are showing an interest in digital place-based media and digital vendors were on site to educate. Similar to Apple’s tutorials for newbies, static sign providers will require a significant amount of guidance and hand-holding as they navigate into the blue waters of digital. This was made evident in part by the DSF’s “7-step plan for sign companies interested in developing a digital signage practice” which was being distributed at the organization’s booth.
Once adequately educated, I believe that static signage companies will decide that only one hat is necessary and instead look for single solutions providers and partners to fulfill their digital needs. This will not be a one-way movement but a transition complementary to both sides. Now all that’s left is to determine who will be wearing the pants.