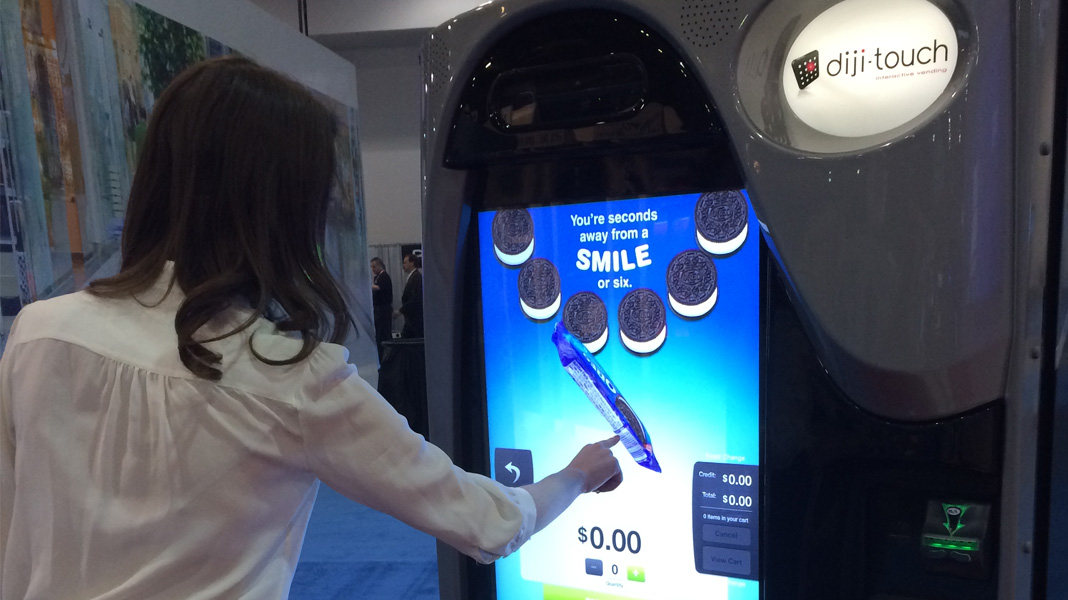 Digital Signage Expo 2014 continued its eleven year growth streak by showcasing over 200 exhibitors throughout a 70,000 square foot space in the Sands Expo and Convention Center. While the amount of event-goers made for a crowd, it would have been hard not to spot Broadsign at DSE, whether due to its title as Conference Sponsor, Second Annual Client Summit or onsite team of at least a dozen Broadsigners.

During the show, Broadsign rolled out its signature red carpet to feature two memorable kiosks. The YESCO 55” Outdoor LCD is a double-sided interactive display in portrait orientation that ran on Broadsign’s digital signage software platform. Another product of YESCO, Branded Cities Network’s Harmon Corner, also runs on Broadsign, yet would have been difficult to bring into the Sands given the LED display’s size of 60’ x 310’; longer than the length of a football field and most definitely larger than the Broadsign booth.

Frank Guzzone and Chuck Kohaut of Mondelez International were present to talk about the other attraction, a diji-touch interactive vending machine powered by Broadsign. Four years ago, Frank was in line to buy a Wii for his son and began speaking with an engineer from Samsung (Chuck) waiting in front of him. The idea for diji-touch came to be and was adopted by the world’s preeminent maker of snacks.

The duo was very popular among attendees who wanted to see how diji-touch enables games, full-screen ads and language changes, as well as those who simply craved a few packs of free Oreo cookies. Visitors learned that products are organized into four day parts and two camera-based technologies are used to gather customer-specific information; one to track the age and gender of consumers, the other, a Kinect camera allowing for gesture-based interactions. Looking to buy a treat for a long distance friend? Send them money through a QR code recognized by the machine. No wonder the sales lift is so strong!

Michael Miller, Director of Marketing Foodservice at Mondelez discussed diji-touch at Broadsign’s Client Summit. His presentation can be found here.