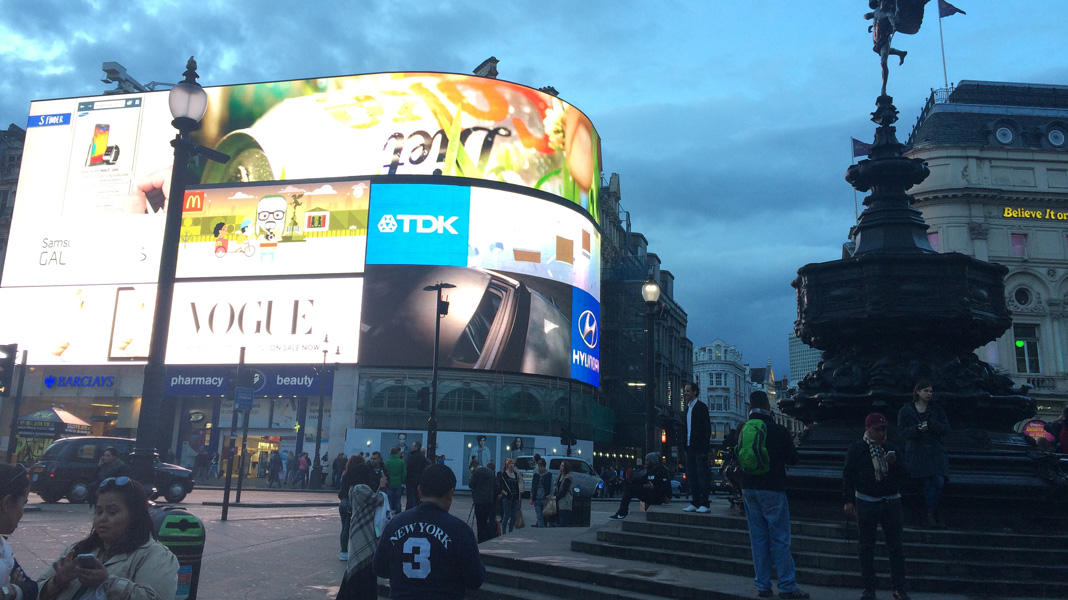 You’ve got to hand it to Adrian Cotterill; known for his forthright insights and quick wit, the Editor-in-Chief at DailyDOOH and Co-Founder of The Ministry of New Media should also be recognized for bringing the digital out-of-home industry together.
Adrian, along with his team of Russ Curry, Gail Chiasson and others, saw an opportunity when Dirk Huelsermann, Head of Vukunet EMEA, suggested that a series of digital signage-related events be held in London. Bringing the momentum and delivering the same quality that attendees of New York Digital Signage Week have come to expect, the DailyDOOH Media Summit and DailyDOOH Thought Leadership Summit – Employee Communications were anchors around the 6th NEC Solutions Showcase held at the Veldrome in London’s Queen Elizabeth Olympic Park. A total of 15 events attracted around 2,000 people from the UK and abroad, proving that #LondonIsThePlaceToBe.

The British economy is improving, bringing new life to the likes of Oxford Street and outdoor media, particularly digital signage. An energized spirit resonated within the BAFTA setting of the DailyDOOH Media Summit. There, David McEvoy, Marketing Director at JCDecaux, noted that the current environment is less adverse to risk; data is more significant and makes digital out-of-home easier to sell to clients.Optimism returns

While this enthusiasm no doubt had something to do with an admiration for presenters and subject matter, it is also caused by London’s affectionate affinity toward digital screens. Displays are tastefully and appropriately located everywhere from the LEDs of busy transit hubs like Piccadilly Circus, to videowalls and wayfinding kiosks in Westfield malls and gigantic crowd-pleasers in train stations (Waterloo Motion, anyone?). Londoners understand the purpose of digital signage and use it to their advantage – no wonder Channel 6 by JCDecaux would have the fifth highest audience reach in the United Kingdom if it were a commercial television channel.

Even in positive periods of growth, Tim Bleakley, CEO at Ocean Outdoor and opening speaker of the Summit, cautioned against measuring DOOH success solely by its increasing proportion of outdoor ad spend. He stated that the digital signage space should instead be guided by its share of overall screens, using Twitter as an example of a media channel that does not pigeonhole itself into a specific industry.
Tim went on to propose six questions for a DOOH Manifesto, some as simple as whether we understand our product and its value to clients and if we’re placing the most powerful screens in the most powerful locations. The proposal deepened as he spoke about the IAB term “omniscreening” (meaning zero downtime and multi-screens) and inquired how we can ensure full integration in the screen family, suggesting that DOOH become the second screen for outdoor the same way mobile did at home.

Though a call for expanding DOOH borders was clear, it also became evident that digital out-of-home networks, suppliers and agencies need to unite so as to best work together and achieve shared goals. Tim’s other questions touched upon accountability (do we have industry ubiquity?), comprehension (do we use and promote a credible lexicon?) and education (are we informing and engaging the creative community?). Between proof of play and automated audience measurement, digital signage provides strong methods of determining ROI. Yet industry jargon and agency education could use some work. Technology is actually ahead of current campaigns and minimizing this knowledge gap requires closer communication.

All in the family

These types of topics are at the heart of American-based organizations like the Digital Signage Federation and Digital Place-based Advertising Association. While the UK is equipped with the Outdoor Media Centre, a separate body could form with the purpose of dedicating complete focus to the digital signage space. Perhaps in the same and speedy way London Digital Signage Week brought the DOOH community together, the fruits of its events will lead to the prompt formation of a national digital signage organization. Eager and active members should be easy to come by.