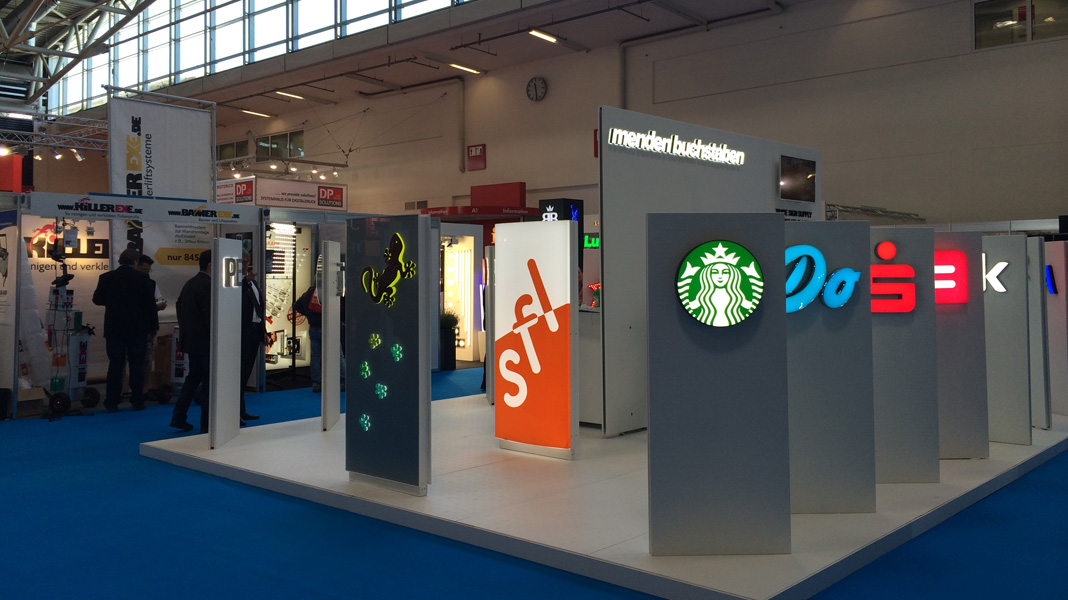 What’s in a name? That which we call digital signage by any other name would function as intended. Right? What happens when the words of an industry are imported to others so that it can spread and grow? By increasing awareness of challenges associated with loose lingo and applauding progress in the development of strong language, both digital signage veterans and traditional printers can become bilingual – sharing respective terms and communicating effectively. The first installment of the series can be found here: Learning to Speak Sign Language: ISA Sign Expo.

Mention FESPA to any printer in the European market and their eyes will light up with admiration. The organization is synonymous with innovative and reputable global trade shows, with the Europe-based expo viewed by its traditional exhibitors as a guarantee for positive ROI.

As with other leading trade associations, FESPA has not been scared to incorporate advances in industry technology. FESPA Digital brought on the now booming practice of digital printing and its 2014 show became the biggest “Digital” event to date, covering 37,000 square meters of show floor at Messe München. As of 2013, FESPA simultaneously hosts European Sign Expo as a way to bridge signmakers (conventional and digital) with printers, many of whom experiencing an increased demand by customers for screen-related offerings. In fact, in an interview with Print and Publishing magazine, Roz McGuinness, Divisional Director at FESPA, stated that 80% of visitors surveyed at European Sign Expo 2013 in London were interested in digital signage.

Yet if that is so, why could the number of screens at the show almost be counted on two hands; a good portion of which belonging to Broadsign’s 3×3 videowall?

At the 2014 TAB-OAAA Out of Home Media Conference, Jeremy Male, CEO at CBS Outdoor Americas, commented on his transition from the European to American OOH markets by jovially comparing Atlanta to Amsterdam. The amount of open space for copious billboards and displays in Georgia makes it much easier for sign owners than the environment in The Netherlands that comes riddled with regulations.

Part of the fun then, in learning how digital signage can be offered as a complement within print portfolios, is learning the mindsets and needs that make each continent, each country, unique. The idea that Europeans are not as exposed to digital signage as North Americans does not fly – simply look at the success of London Digital Signage Week, occurring a week before the trade show, for proof. If anything, given the complexities of Europe and its many languages, one would think that flexible digital solutions would be optimal.

War of the Worlds

The 2014 International Sign Association’s Sign Expo brought many a conventional signmaker to the Dynamic Digital Park, but digital signage suppliers did not receive the same warm welcome at European Sign Expo. Could it be that the “divide between analogue and digital” (OVAB Europe Digital Signage Business Climate Index 2013) is too big for posters and DOOH to work together?
Several print magazine representatives rejected the idea of ever including an article about digital signage in their publication, one even reluctant to allow a digital signage vendor to take the print magazine for her (my) own education. Other hesitant remarks included the issues of roadside safety and diluted impressions, the impact of weather on screens and whether digital signage is technology or consumer-driven.

Chicken or egg conundrum aside, print has been around for decades and digital signage might require a bit more time to mature and prove accusations false. It’s doing so quite quickly, however, with MarketsandMarkets reporting the international digital signage market could be worth up to $14.9 billion by 2020, with a CAGR of 8.94% from 2014 to that time.
It is also encouraging to note that some of the biggest and longest-standing companies in the conventional sign sector understand this and are setting a positive example. In a recent issue of SignLink magazine, an article by Garth Allison, Managing Director at FASTSIGNS UK stated:

“Digital electronic signage is having an additional impact on our business; those who see it as a competitor will miss an opportunity to diversify and provide value to existing customers.”

The direction taken by sign companies across the world (will they unite or u-not?) and the rate at which they do so will be determined by the number of education associations such as FESPA and the ISA that provide their members and the number of print and digital signage providers keen to make love, not war. After all, the prospect of campaigns using print and digital should be exciting not only to consumers and advertisers but to suppliers too.