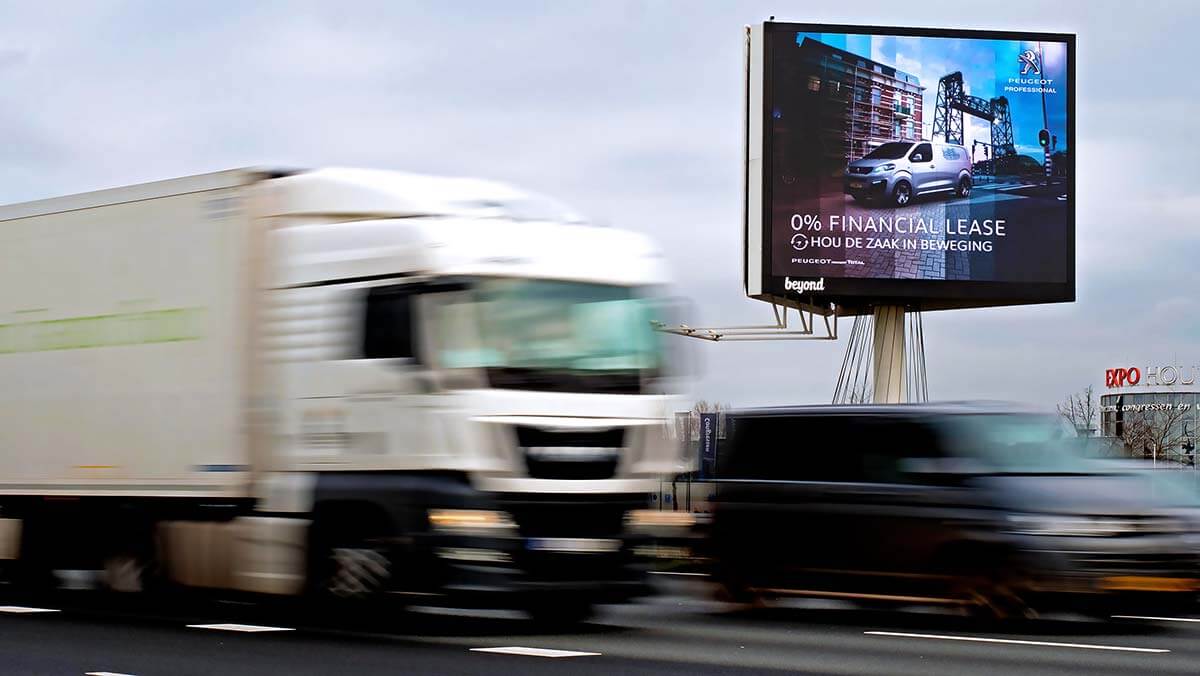 Challenge: To efficiently reach this busy audience during their workday

When Peugeot reached out to Kinetic, a leading agency specialized in planning and buying innovative, high-impact out-of-home campaigns, one thing was clear: the global car manufacturer wanted to do something different and innovative to promote their corporate minivans.

Big screens for a big impact

The campaign’s target audience, owners of small and medium-sized businesses, is extremely busy. Entrepreneurs are always on the go, so for the Peugeot campaign to be a success, messaging needed to become part of their daily routine.

With high-visibility and large formats, screens lining the busiest Dutch highways were an ideal fit for the Peugeot campaign. This included the Beyond Outdoor network, whose screens reach 1.2 million commuters every day, many of which travel the same route multiple times every week.

While 1.2 million commuters is an impressive audience, Kinetic knew that not every person on the highway would be interested in Peugeot’s corporate minivan offering. Instead, Kinetic wanted to find a way to segment the campaign to increase the reach for the specific target audience.

Automated purchasing for a flexible campaign

To be able to optimize the campaign using these findings, Kinetic needed a flexible buying solution that enabled them to change the frequency at which the advertisements were served to the screens. Instead of committing to a week-long, fixed duration, Kinetic used OutMoove’s flexible platform, which enabled them to use their own traffic data to optimize the Peugeot campaign.

“Programmatic digital out-of-home is more efficient and more relevant. Media buyers can optimize their budget by only purchasing time slots that work for their campaign, while delivering more contextual advertisements to each segment.”– Arno Buskop, head of data, tools and analytics at Kinetic

Through the OutMoove platform, Kinetic was able to target the campaign to reach a larger percentage of the target audience. The campaign was triggered to run only when the number of cargo minivans was above a certain threshold. With this flexibility, Kinetic was able to better spend Peugeot’s budget and only deliver ads when the optimal reach was at its highest.

“Programmatic is changing the way digital out-of-home media is bought and we’re excited to be part of this movement. As is the case for the Peugeot campaign, automated purchasing gives advertisers and media agencies the opportunity to reach large audiences, while also providing them with the flexibility to plan and optimize their media campaigns from within their buying platforms.”– Danny Tournier, founder at Beyond Outdoor