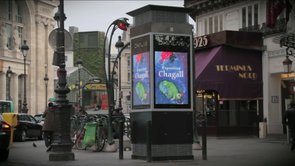 “Ça bouge bien.” Such a simple statement carries quite a bit of weight when it refers to the digital signage sector in a country that hasn’t been overly inviting to the noted channel of communication. Yet it was heard time and again during Viscom rendezvous’ and meetings held away from the show floor. The literal translation of “it moves well” does not provide a concrete explanation of the French DOOH market, but it does provide assurance that things are looking up for digital signage networks and providers operating in this region. And progress is being made tout de suite.
A quick conversation with a French network owner will demonstrate how the country’s administrative policies do not make this line of business easy. Digital signage falls into the category of luminous advertising (lit signage) and thus must abide by regulations that are not tailored to its dynamic nature. DOOH is prohibited in protected spaces and cities with less than 10,000 residents, and local mayors can intensify national rules as they see fit. Authorization must be obtained prior to the deployment of a digital sign and is valid for only eight years. The collection of viewer data is forbidden and taxes are based on three faces instead of a static sign’s one. There are even anti-advertising associations fighting for further restrictions. Luckily, organizations such as the Syndicat professionnel de la communication extérieure (SPCE) are on the rise in supporting DOOH’s raison d’être.
With positive and persuasive associations supporting digital signage initiatives (Digital Media Association France just recently launched its Club du Digital Media, uniting all players in a vibrant manner), one can feel the optimism associated with the growth of DOOH. Retail and transit networks are already a mainstay in the French landscape; Charles de Gaulle Airport is the seventh largest hub in the world, having hosted 61.6 million passengers in 2012 (Union des aéroports Français) and train stations are nationally equipped with digital signage. That being said, outdoor requires development and the lack of digital place-based media in restaurants and bars is surprising given their number and popularity.
To realize the big days in store for DOOH, notoriety and emotion must be stimulated by network operators, platform providers, display manufacturers and creative consultants. Clear Channel Play has taken this mandate to heart by refusing static images for its HD totems and insisting that content for new media must be treated as such. Spots are required to be rich, pertinent, immediate and engaging, and loops are modified in real time.
The real chef d’oeuvre in terms of innovation comes from a partnership between Clear Channel Play and Unibail-Rodamco entitled “Projet Digital Dream”. Launched the week of September 16, 2013 at Paris’ upscale mall, Les 4 Temps, Projet Digital Dream is comprised of three screens that total 250 square meters in surface area. One advertiser occupies all displays at the same time and has the opportunity to awe and engage the 72% of French consumers who prefer shopping in-store to online (ISPOS).
No longer business as usual, the French DOOH space is being bold and taking chances. As consumers come to expect and demand digital screens, perhaps networks will be able to say adieu to stringent regulations.