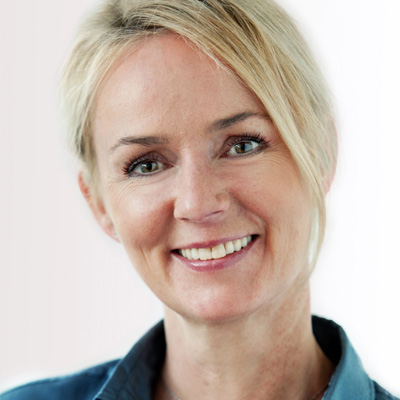 As CEO of the German blowUP media group, the leader in the European giant posters market for the last 20 years, Katrin Robertson is used to looking at the big picture. She spends a lot of her time traveling around the group’s offices, dealing with the demands of different markets, works closely with her parent company the Stroer Group and yet still has time to get involved in mentoring young businesswomen, including an exciting up-and-coming hat designer in London.

Katrin has always enjoyed dealing with all the different aspects of how a company works. Upon graduating from the University of Düsseldorf with a degree in economics and marketing, she joined a consultancy firm that specialized in setting up businesses and organizing everything from financing to marketing and recruitment.

“It was a tremendous all-around training and gave me a fascinating perspective on all the elements that have to be done right if a firm is to be successful, particularly in market research, finance, product placement – and recruiting the right people and getting the best out of them,” she said.

After working on a project for blowUP media, Katrin was offered the job of Marketing Director and has since been promoted to where she sits today. “I was intrigued by the concept of giant posters, which can only be erected on temporary structures and necessitate the continuous refreshment of property portfolios. This means you have to balance the skills and needs of site developers and advertising sales people.”

When she became International Sales Director, one of Katrin’s main projects was moving to the UK for three years to assist executives manage the launch of blowUP media in the UK 15 years ago, helping to steer it from outsider to market leader in a short period of time. “As a young German woman, I did not fit the typical profile of an OOH executive in the UK,” recalled Katrin. “It was an exciting challenge in terms of growing my own career and the blowUP brand, in competition with strong UK rivals in the premium large format sector.”

In 2012, Katrin moved back to the UK as Managing Director of blowUP media UK before being appointed CEO of the whole group.

Now Katrin gets a buzz from managing different nationalities and helping them grow. “I have learned to treat people as individuals and realize that often you have to motivate and encourage them in totally separate ways, partly because of their individual personalities and partly because they are operating in different business cultures and conditions.”

Katrin’s interest in developing people led to her first steps into mentoring younger women in business in her spare time. “It’s very refreshing to review a business in a completely different industry and provide essential advice and guidance taken from my experience in building blowUP’s businesses in several countries in Europe. There’s so much talent out there that just needs some help with the basics from someone who’s gone through the same process and who’s on their side. Often it’s the personal stresses and strains that are challenging, whatever the business you are in and whether you’re running your own business or trying to build a career in a big multi-national.”

Katrin reflects on the state of the OOH industry when she started, a diverse space with many small media owners who would put posters wherever they could (garden sheds included!) and charge by square meter until agencies demanded to pay based on media value. Products were far from the quality offered today, lacking illumination, proof of posting, audience figures and after-sales services. The large format sector also faced challenges in terms of governmental regulations and fighting off competition from other OOH segments.

“After a great deal of time was spent on education and enhancements, the increasing openness from local authorities and property owners, along with decreasing cost of technology, catalyzed the growth of OOH,” said Katrin. “The fragmentation of traditional broadcast media and changes in the way media is consumed also helped, particularly with DOOH, as clients are still looking for broadcast scale and impact. Giant (D)OOH deployments are now a fashionable and disruptive method of cutting through media clutter.”

Katrin cautions that as DOOH continues to expand, particularly in emerging markets, media owners must focus on quality and location – not just the quantity of displays. Saturating cities with screens will devalue the medium and clients’ budgets will not grow proportionately.

In terms of advice for those wishing to expand and innovate, Katrin recommends preparing well and learning as much as possible about client requirements and competitor offerings. “Look for long-term value in building the medium,” she says. “Not every novelty will be a success but remaining educated, and curious gives you a better chance of connecting with viewers and delivering messages they want to engage with.”