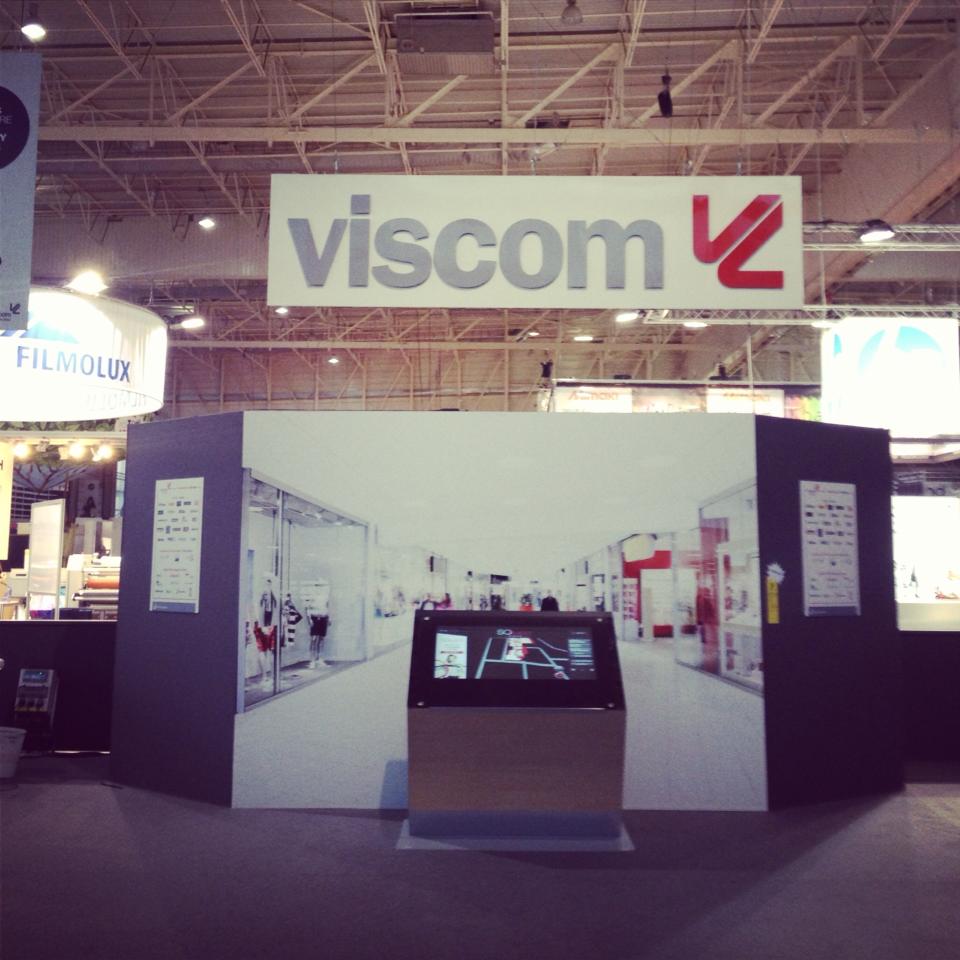 Over the past six months, Broadsign has exhibited at a handful of shows en route from being a showcase of conventional signage players to a mélange of printers, sign and display manufacturers, integrators and digital signage platform providers. While some events made a separate show for digital vendors (such as FESPA/European Sign Expo), others (think ISA Sign Expo) created digital spaces among printers to trigger idea generation and discussion.
Viscom Paris 2013 facilitated the print-to-digital connection through the début of a Digital Village in partnership with Digital Media Association France (DMAF) and Ooh-tv. The Village, made distinct by black-backed booths, was created to be a hub for companies digitizing their outdoor and digital place-based offerings and agencies hungry for the latest trends in digital and interactive communication.
Though the foot traffic throughout the Digital Village was impressive, the idea of combining print and digital was made a bit less intrusive and much more inviting to printers through the arrangement of the Viscom salon itself. In celebration of its 25th anniversary, Viscom adopted the theme of “Imag’in the Shopping Center” by creating a mall-like environment where meetings took place in the Club VIP lounge, lunch was purchased at a supermarket or eaten in a restaurant and conference goers enjoyed mostly digital-focused presentations in a low-lit cinema. All facets used both print and digital tactics.

Conferences concluded that Generation Screen is a fact. The professional flat-panel digital screen market has seen a global year-on-year rise of 30% (Futuresource Consulting, May 2013) and the decreasing cost of large-format displays and hardware is driving digital adoption by static signage users eager to expand their portfolios. Even the start-up cost associated with a digital network (typically more expensive than what is needed for print) can quickly be retrieved through the delivery of multiple ads and targeting capabilities in high demand by advertisers.
Digital signage can prove to be more efficient, effective and attributable for the user, network and/or marketer, but printers are still adamant that their knowledge of a large, long-established industry will prevent them from being positioned as competitors. Au contraire, Viscom’s conventional signage exhibitors and attendees seek to complement DOOH offerings via the convergence of technologies and multi-channel communication strategies bringing both dynamism and contextualization to consumers.
What could be dismissed as the flair French style was more likely Viscom’s way of announcing “we get it”, and both printers and digital providers were on board to explore the show’s overall focus on creation and design.
To illustrate just how comfortably Viscom’s printers worked with digital providers, a certain Broadsigner participated in Fotolia and M2i’s VIZSHOOT which traced the phases of executing print and digital pieces, from the initial picture to the printed or digitally-displayed product. It’s promising to think of the possibilities that digital signage brings to all media channels, n’est-ce pas?